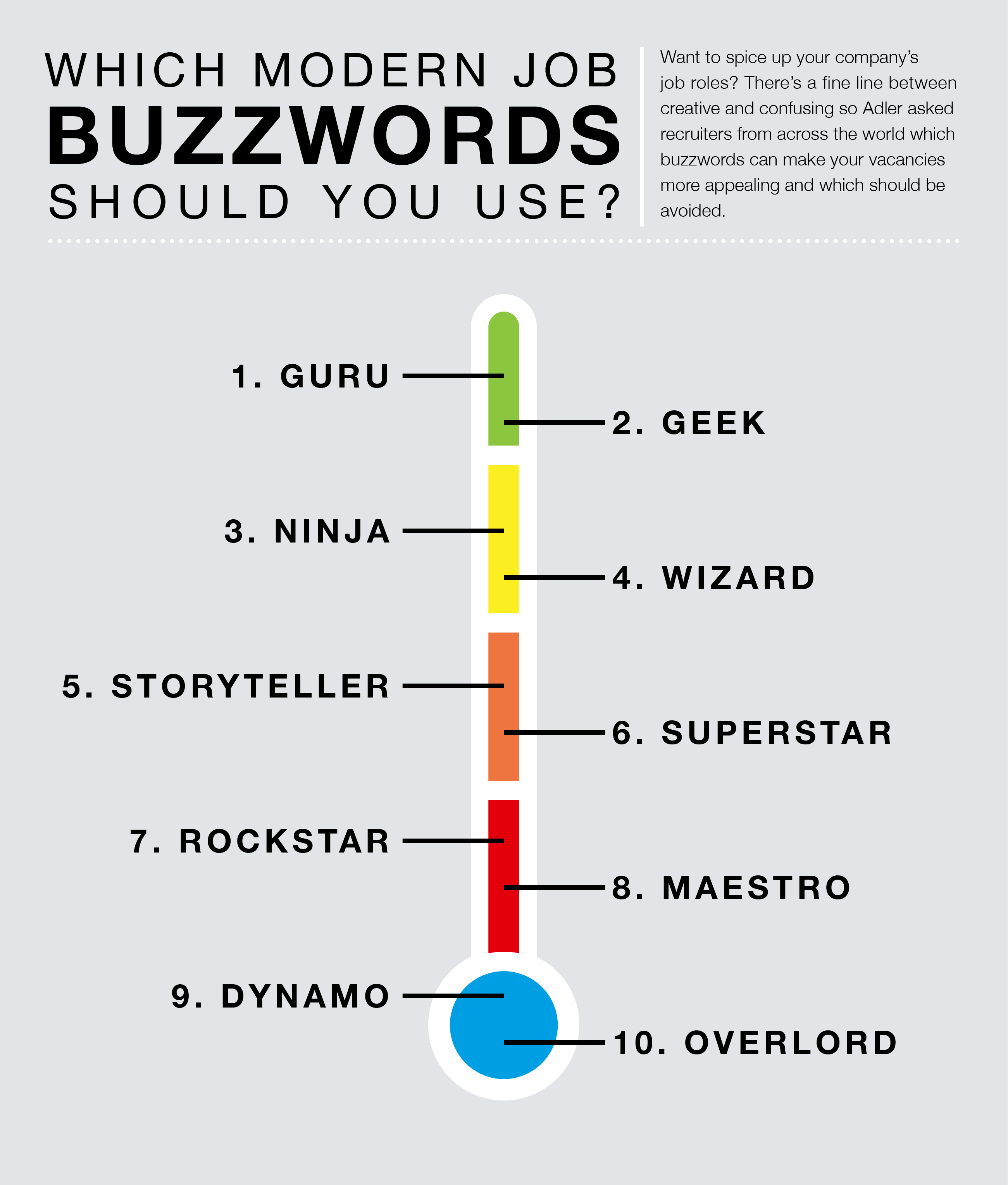 As a small and emerging business, every hire is integral to your success. Many businesses use buzzwords in the hopes of getting the attention of younger workers. You may be tempted to advertise titles such as ‘IT Guru’ or ‘Development Wizard’ in the hopes of landing an employee who is flexible and can meet unexpected challenges as you continue to grow. These seem like flashy titles, but what do they actually mean? Here’s a snapshot of some buzzwords you may see out there:

Candidates must have expert knowledge in a field and a high level of problem-solving skills. They’ll also be able to pass on knowledge to other workers.

Vast amounts of creativity are needed, likely balanced with a very technically-based skillset and able to bring a unique style to work.

Must be self-motivated, with lots of energy and an ever-positive attitude in the face of problems. Almost certainly target-driven and likely from a sales background.

Storytellers lead PR efforts and coordinates promotion across many different channels. They’re in charge of how a brand communicates its ideas to the public to drive increased sales.

These positions demand workers with extensive knowledge of a niche area of expertise, most likely in the realm of technology (such as a programming language).

Rockstar may be used if a company is looking for a forward-thinking individual in their field of knowledge who can produce out-of-the-box ideas. They’ll likely also be target-driven and will regularly exceed said targets.

(left to right) Paige NeJame from CertaPro Painters, Lily Stoyanov from Transformify, Brad Owens from HR Coaching, Doug Monro from Adzuna and Paul Freed from Herd Freed Hartz. Also contributing: Gene Mal from Static JobsGrowing your workforce is a lot different to promoting your business, so we spoke to recruiters and hiring managers from around the world to learn how these buzzwords can promote your business and land top talent when you’re looking to hire.

We asked each of our experts about which job titles are successful in attracting candidates, and which will likely turn people away. You can find the results of their scores, including their thoughts on how job titles can help or hinder the ability to recruit talent, below.

WHY DO COMPANIES USE CREATIVE AND UNUSUAL JOB TITLES FOR POSITIONS THAT ALREADY HAVE CONVENTIONAL NAMES?

GM: They want to stand out, plus this is a way to emphasise that they want the best of the best. They don’t want just a Big Data Analyst. They want an Expert Big Data Analyst. Big Data Guru is the next logical progression. ‘Guru’ implies another level of expertise – someone who can teach experts.

BO: The initial use of creative and unusual job titles was to appeal to those job seekers that felt like they couldn’t stand to do their same, boring job over and over again. A new and innovative title made them feel like this new potential company was taking a fresh approach to what they do and was a more attractive employer.

DM: An increasingly competitive environment for recruiters means top talent is often highly sought after. Hiring managers are facing more pressure than ever to make every available role “the one” and help their positions stand out as special.

WHAT POSITIVE EFFECTS CAN THESE TITLES HAVE ON A COMPANY AND ITS SEARCH FOR RECRUITING NEW TALENT?

PN: Companies may be able to attract a younger employee with these titles.

BO: Initially, I think the shift to more creative job titles led to an increase in motivated applicants for organisations that were willing to think outside of the box with their roles. That doesn’t always mean that the applicants were the right fit, but they certainly had a spike in interest.

PF: It shows off your culture. People work for people, not companies, so showing your sense of humour and culture is good and can add personality to often boring, HR-driven job descriptions. You don’t want to come across as saying “Here are 25 soul-sucking tasks you can do, but you don’t know why. Interested?” Talking like a real person is helpful, but you need to get them to find your opening first.

WHAT NEGATIVE EFFECTS CAN THEY HAVE?

LS: In some cases, the creative titles may be confusing or even misleading. What if the ‘overlord’ is actually there to support all team members and has no voice at all?

PF: You will attract fewer candidates. In fly fishing, you want to “match the hatch”. This means you want to make your fly on the hook look like something the fish are looking for. Candidates do not type ‘Coding Ninja’ into Indeed.com or sort by that. This is a huge disadvantage. Why would you intentionally lose candidates in an effort to look cool?

PN: When I advertise for a position, my first objective is to be as clear as I can be in the ad.  This means I remove all company jargon and boil the position down to the nuts and bolts of what they’ll be doing. By not sugar coating the position, I tend to get fewer, but better candidates who understand what it takes to do the job. By using an unusual title for the position, I might get more resumes, but fewer qualified candidates.

WHAT ARE SOME OF THE MOST COMMON TITLES YOU’VE FOUND IN THE WORLD OF RECRUITMENT THAT PEOPLE MAY BE SURPRISED BY?

DM: ‘Genius’, ‘expert’ and ‘rockstar’ come up more often than you’d think. We don’t see as many ‘overlords’ as we used to, though. Must be a competitive space.

WHAT PROBLEMS CAN ARISE WHEN SOMEONE WITH AN UNUSUAL JOB TITLE IS LOOKING FOR A NEW POSITION, POTENTIALLY WITH ANOTHER COMPANY?

PN: There are two main problems: candidates seem immature or young, or the company they worked for looks unestablished. Often a recruiter will have no idea what that title means, so the candidate is passed over for an interview.

GM: As a job seeker, your safe bet is to avoid them on your resume. They can always write a professional-looking title, i.e. DevOps ‘Engineer’ instead of ‘Ninja’. It’s like going to an interview in professional attire even though your interviewer can wear jeans and sneakers.

BO: When someone that has an unusual job title searches for a new position, they are often faced with the need to explain their past positions in more depth than candidates with traditional titles. Employers often have less trust of potential employees with vague job titles.

DO YOU BELIEVE WE’LL SEE MORE CREATIVE JOB TITLES IN THE FUTURE? WHAT TYPES OF ROLES MAY WE HEAR ABOUT IN 5 OR 10 YEARS’ TIME?

LS: There will be more creative titles in the tech industry, for sure. ‘Cryptocoin Mining Guru’, ‘Bitcoin Trading Wizard’ etc. are likely to come to life.

BO: I think that unusual job titles only have a place internally at organisations that want to promote their culture. However, external job titles and job ads should focus on being much more straightforward and traditional, or else you risk missing your ideal candidate. In 5-10 years, I would hope that employers could create job titles that wouldn’t set their team members up for a headache when they leave their organisation. Think about how you’re affecting their careers.

DM: Pressure is on organisations to push the boundaries more than ever, to stand out for candidates and attract top talent to work with you. With the increase in creative language, we may well be seeing yet more unusual titles joining the fold, from ‘pirates’ to ‘wranglers’, as well as social media developments pushing in words like ‘influencer’. We may even see words like ‘programmer’ or ‘scientist’ make the leap out of the world of STEM and into the marketing mainstream. ‘Brand Scientist’, anyone?

With our 20 year track record of working with 300+ clients on nationwide searches – we can help you too.

Thanks for reaching out. We look forward to connecting to learn more about your story.